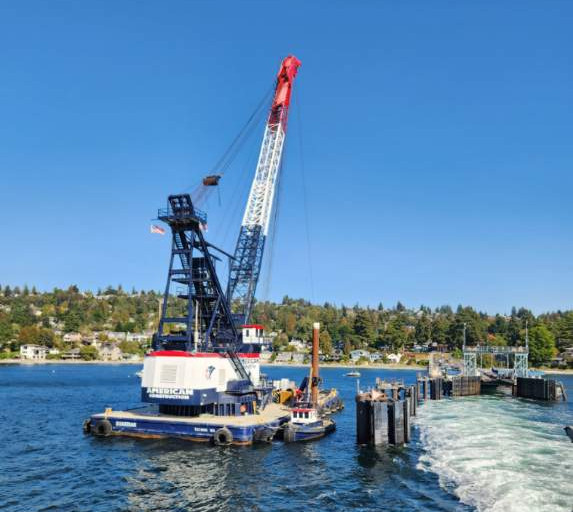 While we wait for Washington State Ferries to announce any initial findings in the Cathlamet accident, the Vashon Loop has been gathering background information to help interpret what we’ll eventually be told about this incident.

An important piece of the Cathlamet’s history is its tendency to crash into docks; thus, it was coined the “Crash-lamet” after incidents during its Whidbey and Mukilteo service. A computer system replaced in 2000 was believed to fully address a failure mode wherein the props would unexpectedly angle for full propulsion. Did this fix it entirely?

Some emergency scenarios call for the captain to steer into a “dolphin” (the term for the piers on the approach to a dock), and to use this impact to reduce the vessel’s momentum. For many years, dolphins were made out of wood, and each such impact required costly repairs. Modern construction uses steel and concrete; therefore, dolphins are now much more rugged, but we have just seen million-dollar boat damage, along with structural crushing that could easily have resulted in passenger deaths.

After a 2003 ferry crash in Staten Island – caused by the Captain’s disabling heart attack and resulting in 10 fatalities – operational rules requiring that multiple personnel be present during docking approaches became even more stringent. On a WSF ferry, it’s almost certain that the officer at the helm has at least one – and possibly two – other personnel in the pilothouse. All such personnel have the training to be able to take action during an emergency.

Video from WSF, released by local TV station KING 5, shows the ferry apparently not making any steering or power changes until well after impact with the dolphin (the video also shows a passenger scrambling away after impact, another sign of how close we came to a fatality). There are very few scenarios where both steering and power control are lost while the boat continues underway. All of them are catastrophic. Since the Cathlamet was docked and unloaded shortly after the impact, it’s safe to assume such failures were not present. The control systems were very likely operational before, during, and after the dolphin impact.

The final bit of suggestive data is that the captain resigned from the WSF the following day. People in the industry assure us that this is very unusual – there is a procedure for finishing one’s career after an accident, and there’s no reason to stray from it. When the report for the Cathlamet incident eventually comes out, if the reason for this behavior is not explained, you can be sure the report is incomplete. Also, all personnel were drug-tested soon after the crash, and all tests came up clean; this is not about booze or pills.

The weight of evidence tells us to watch for human factors in the pilothouse, rather than mechanical failures. What was the medical status of the captain before, during, and after the accident? Who else was in the pilothouse? What were they doing as the dock drew near? Who ultimately took control and kept the boat from running aground?

The report will probably touch on dolphin design. Building dolphins to be roughly as strong as the ferries they deflect has come very close to costing one or more passengers their lives. Just as cars are now designed with crumple zones, we’ll hopefully hear about dolphins that can do a safer job of absorbing a ferry’s impact during an emergency.

It’s More About the Fascia
The Roasterie News