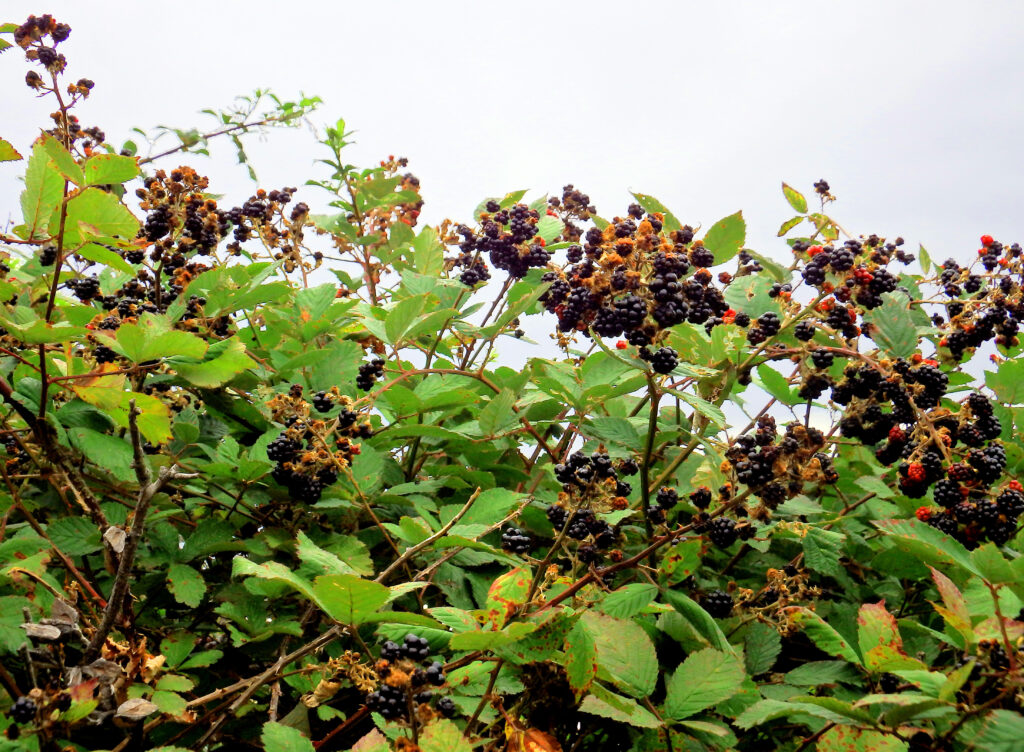 Landing on Island and surveying the possibilities of restoration work, the first major and apparent challenge is handling the intimidating blackberry buttresses. Their thick ridged canes form seemingly impenetrable thorny defenses, any attempt to wrestle them resulting in a desert sky’s worth of red and purple constellations. Their ability to regenerate and reproduce is staggering, boasting over a dozen ways of reproducing asexually, thousands of seeds being generated by a single pant. Their growth rate of 5-8cm a day can leave one feeling like Sisyphus ever rolling his boulder up hill, sections having been cut back seemingly regrowing over night. Witnessing Himalayan, or Armenian Blackberries ability to climb and strangle out other shrubs and even trees leaves me with clenched fists. Yet despite the murderous feeling I often feel for this plant, I never turn down a taste of their bountiful fruit. While I only ever seem to catch thimbleberries for no more than a couple fruiting days, Blackberries seem to produce their juicy gems all summer long. Had Persephone visited Vashon, Hades would have likely offered her a Blackberry patch, the bountiful fruits entrapping her while vines grew, forming an impenetrable holding cell.

However, I cannot help but admire the voracious abundance that is Blackberry. I cannot disperse my awe as Blackberry continuously resists the violent efforts of containment used by so many cities and individuals. The way HBB looms over roadsides, choking off access roads, and crowding property lines, I cannot help but feel empowered by their resistance against the‘order’ we humans have enforced upon the land. As I release my anthropocentric view of this ecological web my bloodlust is replaced by a wondering at what teachings blackberry holds for us in this time. Though I still grieve the species they continue to choke off and crowd out, I recognize the consequences for our actions. The way they slither into disturbed areas, almost like an immune response. The way they weave themselves over river banks, as if guarding these life paths from our corrupting hands, a fever of the land.

When my kitty lost his tracking collar, and the GPS located it in the middle of a buttress of Blackberry that rivaled the grandeur of the Great Wall of China, I felt dread. I wondered whether that expensive little device was worth braving the wrath of those wicked thorns. As darkness fell I walked the perimeter of the wall of thorns. My first breach attempts were thwarted easily until I noticed a point where the vines were not woven so thickly. As I pulled back the draped canes a tunnel was revealed. The thorns grasped at my clothing as I emerged into a cathedral with arched ceilings and twisting columns. I noticed deer and raccoon tracks crossing back and forth, hidden from view, safe from the eyes of humans. And in that moment my feelings for Blackberry shifted dramatically. While I still feel the grief bordering on anger when I witness their conquest of large swaths of land, it is tempered with a slew of other emotions. Feelings of responsibility, that we introduced these beings to this place and disturbed the local balance so that they are susceptible to the invasion of Blackberry.

Recognition that their conquest is not the oppression that we have forced upon all other-than-human beings of these lands. That though they crowd out and choke off some species, they also feed and shelter others. As I fume at and hide from the many atrocities we humans are actively enacting upon our earthly community, I now look to Blackberry. We must learn from their resiliency, weaving our connections with each other, human and otherwise, so thick as to be impassable, scaffolding each other to reach higher heights. We must become so robust with our creativity and empowerment that though our stems are cut and our roots dug up and sprayed with chemicals we need but only the smallest root fragment to re-sprout. We must grow with such abundance and rigor that though they may cut us back day after day, they cannot keep up with our ever-present growth. And we must cling to reciprocity and abundance even when things get ugly, always producing more fruit than could be consumed, always creating shelter for those who have no other place.

Now, as I cut back cane after cane of Blackberry, I respond to each poke and scratch
with a murmur of gratitude following my profanity.