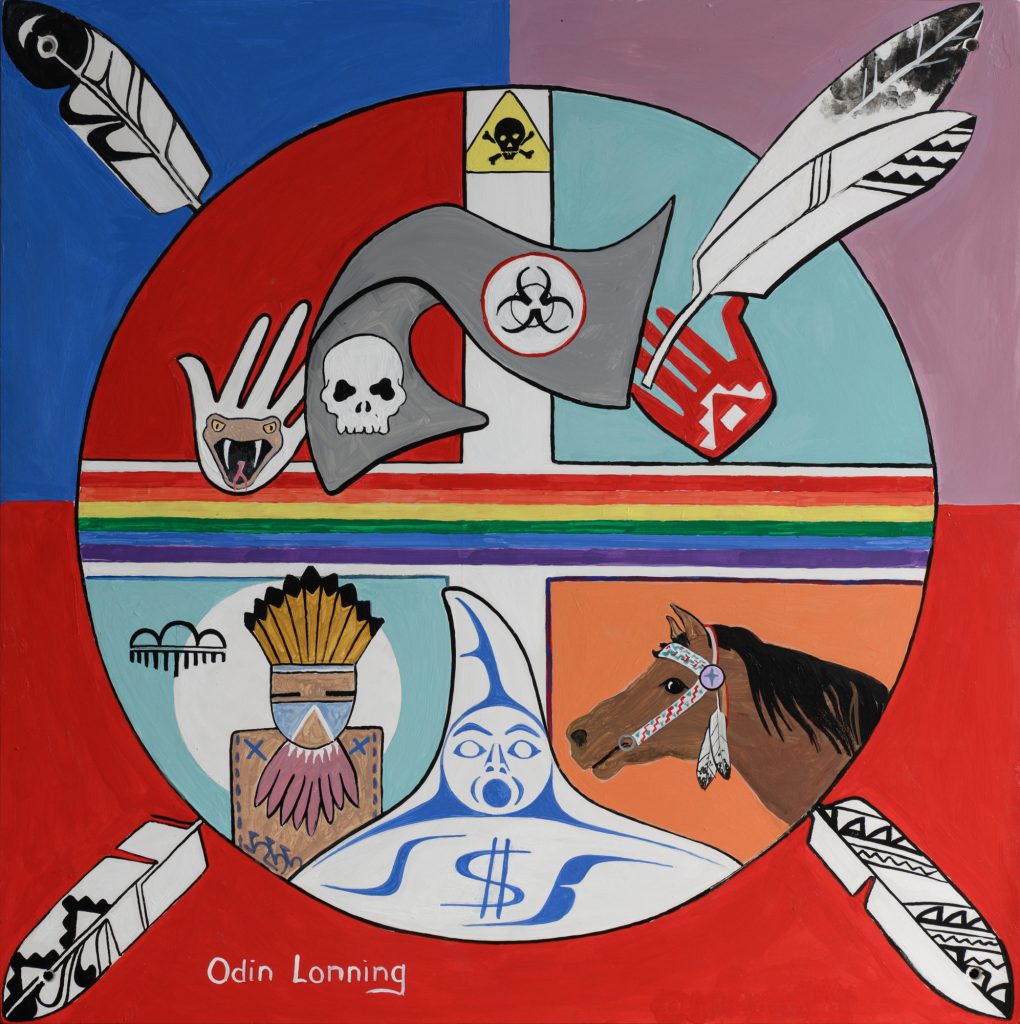 The COVID-19 lockdown brought into sharp focus our intergenerational trauma – emotional and spiritual baggage habitually restrained in “normal” times. We dove deep into our Indigeneity. Our thoughts turned to our First Nations ancestors who endured countless pandemics inflicted on them by colonization, the federal government, and the military. Would we survive this novel coronavirus? In BIPOC communities, death rates are much higher.

Another of Odin’s panels for the Open Space Mural Project is “Marginalized and Monetized,” (panel E1, photo), a potent visual statement on social inequity and residual trauma, conceived in an era of major upheaval. This piece reveals forgotten history and culture lessons for Native American Heritage Month.

The Medicine Wheel or Sacred Hoop exemplifies circles of life, knowledge, and self-awareness. Quadrants represent four directions and seasons, as well as four elements, states of being, sacred medicines, and life stages. The Medicine Wheel is an ancient safe space for health and healing, as well as a vehicle for myriad essential Native teachings.

Working with the Medicine Wheel can alleviate historic grief. The topmost skull and crossbones in our wheel warns of obvious danger from COVID, and of unforeseen risk to physical and psychological well-being in confronting the painful past. The upper half of our wheel exposes the horrors of Manifest Destiny.

The European Hand of Contact extends from top left. A venomous viper in the palm signifies the treachery of broken promises and broken treaties. This ghostly hand is forcing a deadly gray blanket into a Native hand. Smallpox-infected blankets were a weapon in genocidal policies to eradicate Indigenous peoples. An antique skull alludes to that agenda. At center is the omnipresent biohazard sign of a COVID outbreak.

A Rainbow Bridge connects the two halves. In many cultures, the rainbow is a portal to the spirit world. In a Chumash origin story, the earth goddess Hutash creates a rainbow bridge to the mainland (California), and transforms her people into dolphins to save them from drowning. Rainbow is a clan crest for the Haida and Tsimshian. These are just a few Native rainbow prophecies and perceptions. Our rainbow also shows solidarity with another disenfranchised community – Two-Spirit/LGBTQ+ loved ones and associates.

The lower half is grounded in red earth and the Good Red Road. In Hopi culture, Katsinas are divine messengers and spirits of deities, animals, elements, other natural phenomena, or deceased ancestors. “Katsinam” are dancers who embody these spirits in ceremonies; “katsintithu” are intricately carved wooden figures representing the dancers. Our Katsina is a composite because an exact rendering of an authentic one would be disrespectful. A rain cloud symbolizes renewal and fertility.

Pono-Kamita – Blackfeet for “Elk Dog” – and šúŋkawakȟaŋ – Lakóta for “Holy Dog” – are names for Horse, our sacred relative and four-legged healer. Partnership with the Horse Nation revolutionized Indigenous life. Horses make exceptional therapists because they are so attuned to humans. We honor horses with their own regalia and in diverse Native art forms. Our horse wears a decorated bridle.

Killer Whale rises between Katsina and Horse. A Salish spirit face in the dorsal fin acknowledges that much of Southern Resident killer whale (SRKW) traditional territory overlaps with Coast Salish territory. The dollar sign echoes the skull and crossbones above. Monetizing what Indigenous peoples hold sacred is toxic. Is the spirit face singing or screaming?

Now to end on an inspiring note: We are thrilled to report that SRKW mom Spock’s (K20’s) months-old baby K45 is a girl! Females are urgently needed to sustain the critically endangered SRKW population. May mother and offspring live long and prosper.