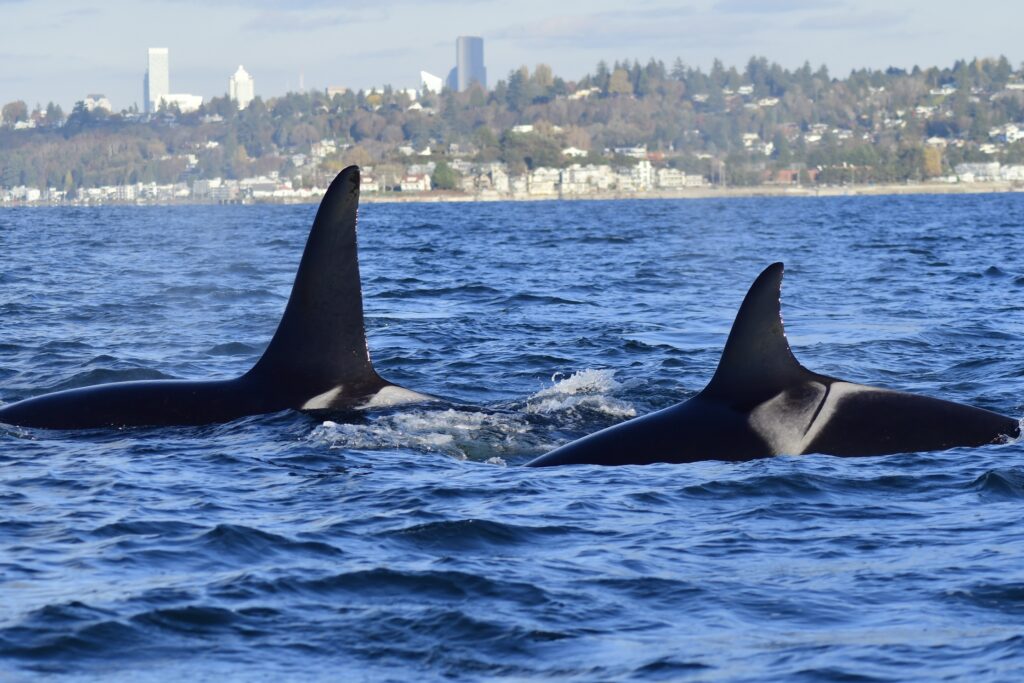 When I lived on San Juan Island and interned at The Whale Museum in the early 1990s, I saw at least one Southern Resident killer whale (SRKW) superpod each summer. A true superpod occurs when every member of the Southern Resident community congregates, though sometimes the term is applied to a gathering of most, but not all, SRKW. I fondly recall standing on the west side of the island, overlooking Haro Strait, and watching in delighted amazement as nearly 100 orcas from J, K and L Pods streamed in from the Strait of Juan de Fuca.

The SRKW lined up facing each other in greeting ceremonies, and then commenced partying in smaller festive groups, where seemingly ecstatic participants engaged in intensive socializing and mating, along with a stunning variety of percussive and tactile behaviors. Witnessing these extraordinary Kéet rituals is a precious gift that induces euphoria in human spectators, as well. The SRKW population peaked at 98 in 1995.

Today, our critically endangered SRKW population has dwindled to 73, the lowest number in 38 years. From November 7-10, all 73 members of J, K, and L Pods – 25 in J Pod, 16 in K Pod, and 32 in L Pod – were in the vicinity of West Seattle and Vashon, hunting salmon, and socializing in a veritable Southern Resident superpod.

During these four days, our friends and colleagues Mark and Maya Sears were the only NOAA-permitted researchers on the water obtaining identification photos and collecting samples – fecal, prey, mucus, whatever floats. They confirmed the presence of all SRKW matrilines and 2022 babies, J59 and K45, both females. J59’s mother is Hy’Shqa (J37), age 21, and K45’s mother is Spock (K20), age 36. Mark first spotted Hy’Shqa as a baby in Vashon waters in 2001. He also discovered Spock’s first calf Comet (K38) in Colvos Pass in December 2004. Beloved Blackberry (J27), age 31, appeared skinny when he breached, but he is energetic.

Diminished prey availability substantially contributes to the abysmal decline of the SRKW. This fall, fortunately, Chum, Coho, and Blackmouth (juvenile Chinook) salmon are more abundant throughout the north and central Puget Sound areas where the SRKW are foraging. Odin and I observed several orcas searching for salmon at Tramp Harbor on November 9.

These SRKW encounters were exceptional because L Pod has not visited Vashon since January 2020. Superpods and greeting ceremonies are now infrequent, partly because the endangered SRKW of 2022 are considerably more fragile and food-stressed than the SRKW of the early 1990s. A superpod in the central Sound is quite rare. The last well-documented superpod occurred in September 2018 near Victoria, BC. Please read my related November 17 article at https://www.vashonbeachcomber.com/news/rare-southern-resident-orca-superpod-visits-vashon/

Pregnant Racer (L72), b. 1986, and her adult son Fluke (L105), b. 2004, are the gorgeous orcas in the photo. On September 10 2010, Racer carried a deceased female neonate on her rostrum for many hours. She is one of at least four SRKW mothers seen engrossed in this heart-rending rite. The most extreme case was Tahlequah (J35) in 2018, when she carried her dead newborn for 17 days and 1000 miles. We pray that Racer gives birth to a healthy baby this time.

While we celebrate the annual return of imperiled SRKW to Vashon, we urge readers to embrace personal behavior that promotes the recovery of this culturally and spiritually significant orca population. Reducing our carbon footprint benefits orcas and their food source, salmon. We tread lightly by refraining from chasing endangered SRKW – in fossil-fuel emitting cars, power boats, and ferries – all over the Salish Sea, and by watching orcas at a location closest to where we reside.

Reporting whale sightings to Orca Annie at 206-463-9041 and vashonorcas@aol.com supports the non-invasive research of Mark and Maya Sears. I deeply appreciate your reports.

On November 23, my mission was to lay eyes on K Pod’s new relative, Baby K45, with her exquisite mother, Spock (K20). Did I succeed? Find out next month.