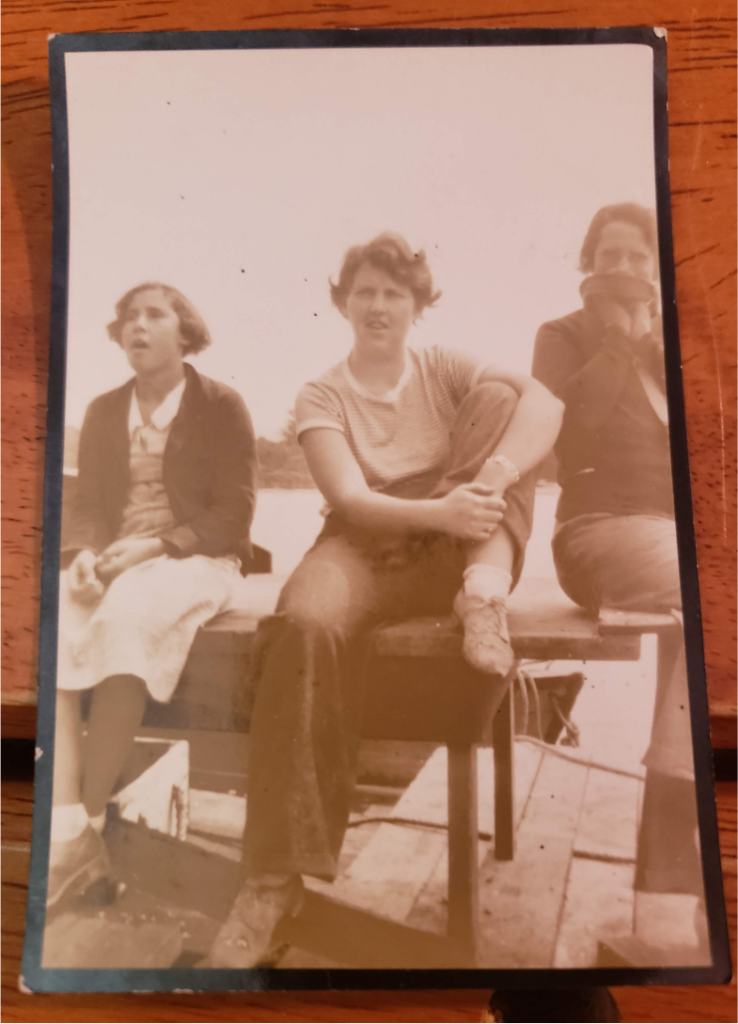 When the Loop folded its tent and crept away last summer, I thought, well, that’s that.

I was recovering from a broken back at the time, and that took up a lot of time and energy. So, I blessed The Loop and let it go in peace.

Then word came that The Loop was being resurrected. As long-time readers know, I am a big fan of resurrection.

What is there to write about these days? Politics? Religion? Money? Or the chores with tiny steps that bog us down like the La Brea tar pits? That’s what I’m up to. I have started sorting through the gazillion family photos, again.

While going through some old pictures from my dad’s side of the family, I came across a picture of two deceased aunts with one other woman. Someone had written on the back, “1932. Chick, Thelma, Nell.” Thelma and Chick were my father’s sisters. But Nell? Who the heck was Nell?

The picture was taken at my grandparents’ fishing camp at the mouth of Smith River, in California, north of Crescent City and south of the Oregon state line. It is now the Ship Ashore trailer park, restaurant, and motel. You can’t miss it. The ship is right up by Highway 101.

My brother and cousin Charlotte didn’t know who Nell was, but a call to my cousin Jimmy brought enlightenment. Thelma was his mother, and Nell was her BFF, he said. Mystery solved. I must admit that I was surprised he said “BFF.” The man is 81. But he has children and grandchildren and does not live under a rock, so.

That is the problem with sorting photos. They are a gateway to riddles and reminiscence. You start thinking about things and people from years ago and being mystified wondering who the people in some of the old photos might be, because so often no one bothered to write names and dates on the back.

Did this sort of thing teach me a lesson, so that I faithfully dated and labeled the backs of all my photos? Hahahahaha. Nope. I took way too many pictures of my own kids. I was thinking they’d like to see them after they grew up, but photos are all digital now. Why would you want to load yourself down with hard copies?

We boomers are a dying breed, literally. I wish that didn’t make so many people happy. My generation dropped out of college, hitchhiked around the country, slept with strangers, and used various illegal drugs, although LSD was still legal when it came on the scene, and people really liked it. This made other people panic, and the next thing you know, LSD was an illegal substance. Kind of closing the barn door after the horses were hallucinating.

Not all boomers lived the “sex, drugs, and rock & roll” lifestyle. Many stayed in college, got degrees, grew up to take over the running of the country (those who did not die in Vietnam), and brought us to our present state of peace, love, and dope.

Considering that we marched for peace, civil rights, and human rights, we boomers didn’t make much progress in the peace, love, and ending racism and sexism areas. Our parents were the Greatest Generation. We were the “Groovy, Man, Far Out,” generation.

We are now relics of fogeydom and probably the last generation that wants to hand down pictures, sets of dishes, silver (plated) eating utensils, and other family heirlooms that our children have no desire to schlep through their lives. Our children and grandchildren have more immediate issues, like trying to make our planet remain habitable for humans – might be too late for that – and trying to keep the nuclear powers from turning humanity into so many radioactive cinders, assuming the wildfires don’t get us first.

I get it. They want to have a future, not cling to the past. Right on, kids. (NB: “Right on” is a slang phrase from the late 60s, usually done with a fist pump; it’s roughly the equivalent of, “You go, girl,” except political. And NB is short for the Italian/Latin “nota bene,” meaning, pay attention, damn it.)

Still, kids, you might enjoy having that picture from 1932 of Chick, Thelma, and Nell, living through the Depression, which, my mother told me, was not a big deal there on the Central Coast of California, especially if you were a farmer. She made it through, earning a whopping $10 a week at her bookkeeping job, which paid for room and board. She took piano lessons down at the Notre Dame Academy, a Victorian fantasy of a building on Main Street. But that’s a story for another time.

To Quiet Inflammation: Stress Helps To Make Us Fat
Of Glitter Bombs and Package Thieves