Home » Do Clams Have Eyes? 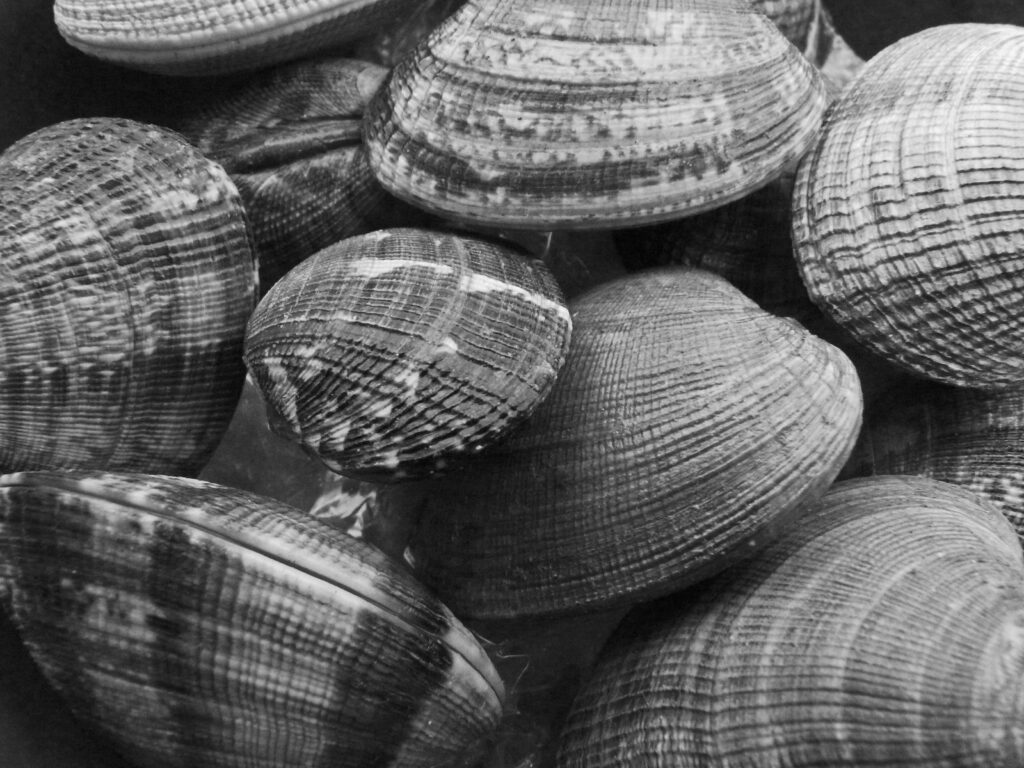 Do Clams Have Eyes?

As kids, we seemed to start out on a rather low rung of the evolutionary ladder. Pretty much all our activity – not strictly devoted to mere troublemaking – was of the “hunter/gatherer” nature. We were always on the lookout for useful items: driftwood, food plants, clams, stinky dead things … anything that met our low standards of usefulness or transient interest. Frequently, our definition of “usefulness” was not appreciated by our parents.

“Hey Kit, do you wanna see the eyes of a clam?” The bucket of fresh clams was in the shade in a corner of the woodshed and the clams were squirting water out of the top of the bucket and onto the ground as they fed on the cornmeal that Mom had given them to sweeten their stomachs while they expelled sand. I very carefully reached in the bucket and pulled out a half-open clam and offered it to Kit at eye level. “Here, look inside the shell and you will see his eyes,” and I gently squeezed the shell, causing the clam to squirt seawater in Kit’s face.

Kit exploded, and chased me out into the peach orchard where we could lie on our backs to stare at the clouds, so hard we could split them. You could hear old Boots, our Springer Spaniel gnawing on windfall peaches.

“Go out and get a basket full of lamb’s quarters…” John’s Mom directed, and he and his sister complied. Lamb’s quarters were what we know today as weeds, but decades ago they were seasonably harvested as similar to spinach, but better … especially slathered with (lots of) farm butter.

Other things regarded as weeds today were regarded as regular forage items in those days. Fresh young nettles, fiddlehead ferns, and early dandelions were prized for both taste and good nutrition. Parental standards were high, and it was rare that more than half of our offerings were accepted by our moms, especially dubious varieties of mushrooms. It is a wonder we survived childhood, as many mushrooms were tasted on the basis of “I dare ya to taste that!”

We also looked for borage, sorrel, and even tapped the maples for an inferior type of syrup … which, while tasty, took tremendous effort to collect and boil down. Vine maples along cold creek bottoms were the best.

The maple syrup technique was pretty simple: One snagged an old hand drill from the barn, and after intense effort, bored several holes into as many suitable trees as could be found. A hollow tap was inserted into the bore. From this tap, sap slowly dripped into tin soup cans hung by baling twine.

Sometimes, as many as several dozen cans were hanging from trees, and sap collected every morning, along with various sundry ant and insect life. The effort did not usually last long, because the results were slim and the patience of we kids and mom was quickly exhausted. But we usually got a few tasty lumps of dark sugar out of the efforts, which were quickly put on hot oatmeal with thick cream.

If you remember this process, you probably have a clue as to why no significant maple syrup is produced locally, since it required a lot of no-cost kid labor to get anything at all. Besides not having the proper maples in the first place.

There is licorice root to be had from inside the moss on the bark of maple trees. It looks like a maidenhair fern, but isn’t. Old Bill, who used to work for Mr. Joslyn, told us kids that it was an old Indian remedy for sore throat. Mom showed us how to dry it and then chew on it for the licorice taste.

You had to be careful of what old Bill told you, since he was an Alaskan fisherman and full of wild tales, like the day we walked up to Joslyn’s to hear more of old Bill’s stories and I had a bad cough. Old Bill collared me and took me down to the barn where they were dipping cedar fence posts in creosote to preserve them and keep them from rotting out. It was black goo that stunk to high heaven, and Bill made me drink a cup of it to cure my cold. I told Mom, and it made her mad as a wet hen. “He could have killed you,” was what she said. I can’t remember if the cup of creosote cured the cough or not.

What We Hold in Our Hands
ACA Health Insurance Open Enrollment