Home » Finn and The Salmon Of Wisdom 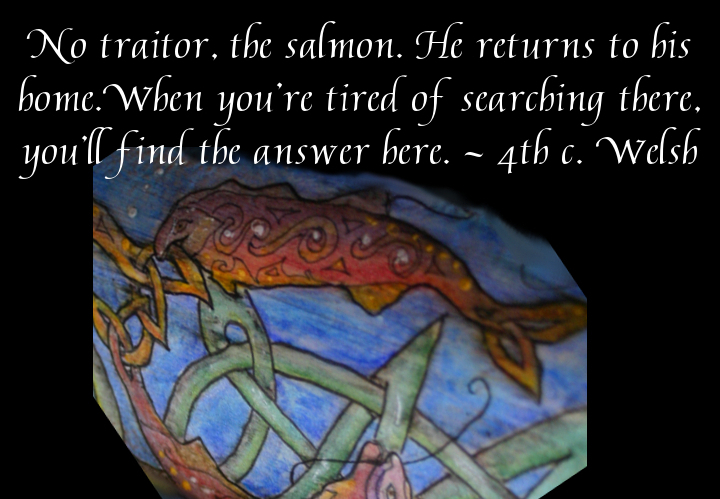 Finn and The Salmon Of Wisdom

A retelling of an Irish myth
Illustration above by Jane Valencia

Here on Vashon Island, now is the time that the salmon return home after long years in the ocean. Up streams and rivers they swim and leap and lunge, taking in deep scents of the waters along the way, smells that reach into their beginnings and lead them back. They make a long and dangerous journey to birth baby salmon, and to die in their home waters.

This is a story about one particular salmon, an elder man, and a boy. Legends say that this particular Salmon is none other than the oldest of all animals, born in the pool at the head of the river, back when the world began. This Salmon has journeyed hundreds of miles from out in the ocean to return to a particularly sacred river. This Salmon, being the oldest of animals, holds the memories of the land since the beginning of time. And, having lived thousands of years out in the ocean, this Salmon holds all the wisdom of the sea, so legends say.

Well, Finn in this land is a common enough name. The name means “fair one” – one who is pleasing to look at, or one who has a quality about him that makes you look twice. It could be your birth name, but you might also receive the name later, because of some deed you’ve accomplished, or because someone admires you for another reason.

One of the many people of the land named “Finn” is a poet and wise man named “Finneces”, which means Finn-Seeker. And certainly, Finneces is a seeker. When he learns that An Bradán Feasa – The Salmon of Wisdom – has made its way up this very river to its headwaters, he treks out there, too. As a poet, it is his greatest dream to receive the Salmon’s wisdom. Imagine the poetry he would compose! Imagine the noble folk – kings and queens, druids, and priests – who will consult with him on important matters.

Finneces indeed discovers a pool at the head of the river, surrounded by nine hazel trees. And as those hazel trees drop nuts into the water, Finneces watches, open-mouthed, as the ancient Salmon of Wisdom rises up from the depths of the pool. This Salmon is battered, lumpy, aged, and large, like an old-growth tree. Swishing fins and tail, as if offering a bit of gratitude to the trees above, the Salmon eats the hazelnuts that have fallen into the water. But the Salmon leaves some of the hazelnuts as well, and the hazelnuts get caught in the currents and begin to float out of the pool. Suddenly hungry, Finneces snatches the hazelnuts out of the water, and in a few moments he’s cracked those nuts and eaten the meats of them. At Finneces’ action, the Salmon turns on its side, one eye upon him, then slips away to some hidden place in the water.

Seven years pass. Finneces has tried catching that Salmon by any way you can think – line, nets, weir – but the Salmon evades him, remaining mostly hidden in the murky depths of the pool. The Salmon arises only to eat an occasional hazelnut that drops into the water.

“Ah, some day,” sighs Finneces, as he adjusts the nets in the water, and settles under the trees. At that moment, a breeze moves through the woods like a fish, and that the trees themselves begin to murmur like water …

And now another sound rides on the wind. A youthful joyful cry – close at hand!

Finneces scrambles to his feet.

A boy, maybe 12 years old, bursts up from the bushes beside Finneces. The boy laughs.

“You didn’t hear me, did you, or see me! You were so intent on your thoughts – so I snuck up on you … But I hope you’re not offended. My grandmother sent me to you – she’s a lady of the forest, and she said I’d be safe with you if I became your apprentice. My dad’s enemies will try to kill me someday, but a poet’s body is sacred. So, I’m safe if I’m your apprentice – that’s true isn’t it?”

Finneces feels himself dazed and dazzled. This boy seems to have appeared out of nowhere, and where once were the quiet forest sounds, now … all this talk! And, indeed, something seems to be … dazzling about this boy.

“Yes,” says Finneces, coming to his senses. “Yes, you’d be safe as my apprentice. Do you … do you want to be wise, lad?”

The boy laughs – such an infectious laugh. “Yeah, sure,” he says.

At that moment, water bursts up like a geyser from the pool. From its center, the great Salmon of Wisdom flings forward in a wave of water. Rolling onto its side, the Salmon peers with one eye at the youth.

“Amazing!” Finneces says. “I’ve never seen the Salmon take much note of a person, why I – ”

In that moment, the Salmon tumbles into Finneces’ nets. The fish begins to thrash.

As Finneces lunges for the net, the boy springs for the other end. With a strength that takes Finneces by surprise, the boy hauls the Salmon out of the pool.

Finneces pulls out his knife – his hand is shaking. This is it! This is the moment he’s awaited for seven long years. In an eternity that lasts an instant, Finneces stares at this huge creature, battered by many long years, many long journeys. As the Salmon returns the gaze, Finneces understands clearly that the Salmon has decided to give its life to them.

“Thank you, Ancient One. Thank you, Lord of the Ocean, of the River, Keeper of the Memories of the Land.” His knife fumbles from his fingers.

The boy retrieves the knife.

“Go ahead then, boy,” Finneces says.

With a nod, the boy first lays one hand on the great creature. He looks into the Salmon’s eye, and seems to know too that the Salmon is giving itself. With a deep breath the boy accepts the gift and takes the life.

The boy and Finneces rest in that shining stillness that opens when a soul leaves a body. And for a time that stillness lasts.

Then the sounds of the forest return.

And Finneces does. The boy himself works carefully, doing what needs to be done to prepare the fish.

Finneces cannot feel settled. “I – you do the cooking, please. I’ll gather more wood, yes – that will help steady me. Just don’t eat any of the fish.” And he races off into the woods.

As soon as Finneces leaves, the boy tends the fire, talking with it, sensing just what to do to keep it burning in just the right way to most honor this fish. He hears Finneces returning up the hill. And at that moment, the fat on the fish bursts and three scalding drops fall upon the boy’s thumb.

“Ouch!” The boy thrusts his thumb into his mouth.

As he tastes the fat, all the memories of the land … all the wisdom of the ocean … flow into him.

He draws his thumb away, just as Finneces returns bearing the wood. “Boy—are you all right?”

But something in the boy’s eye tells a larger story to Finneces. Finneces chuckles. “Boy, it’s all right. What’s your name then, lad?”

“Finn. Son of the mighty warrior Cumhaill.” Finneces chuckles again. “Oh, yes. I see clearly now. The prophecy was meant for you. All that wisdom, all that inspiration contained in only the first taste of the Salmon. Well, then. It’s all yours. Let’s continue with our task of enjoying this Salmon.

And so they prepared a plate of Salmon for the Ancestors, as well as for themselves. And they set out Salmon for the animals that had begun to gather at the edges. And the Gulls ate, as did Raven and Wolf. Bear dragged the carcass out to the trees, so that not only did Bear eat, but so did the forest. All were nourished by the Salmon.

They fed Salmon to the waters and to the earth. And the two Finns, Finneces and Fionn mac Cumhaill, savored the flesh of this incredible salmon, in awe of the tremendous gift that Salmon brings to all of us.

We may not experience the wisdom of the ocean and memories of the land in quite the burst that Fionn mac Cumhaill experienced, but something of the Salmon can nourish us in this way at any time. When you next eat Salmon, you may want to take time to not only give thanks to this mighty creature that braves so much to return to its birthplace and give of itself, but to savor the secrets that are meant just for you.

jane Jane writes about what it means to be an Islander, and how we can nourish healthy community. Having lived with her family on Vashon for 20+ years, she remains convinced of the island's magic.