Home » The Vashon Theatre Premieres a Series of Fortunate Events 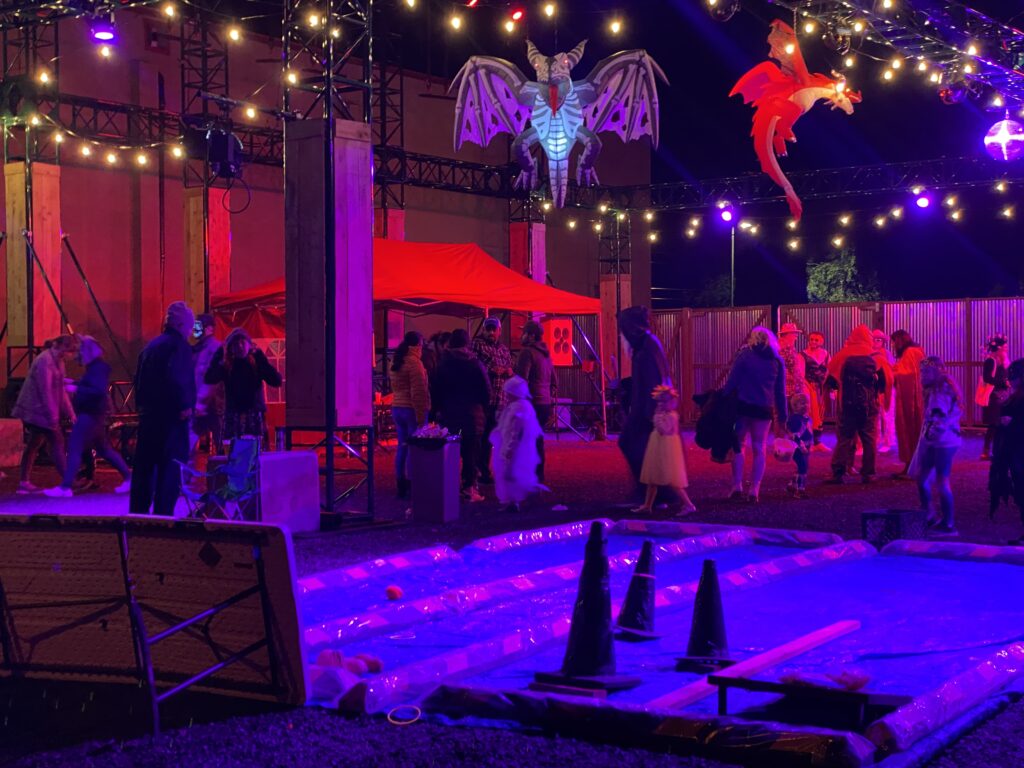 The Vashon Theatre Premieres a Series of Fortunate Events

Sadly, no one has ever offered me a free LED TV. If they did, probably the first thing I would ask is, “How big is it?” If they said, “32 by 18 inches,” I might accept it to be polite, then maybe set it up on the barn to play calming videos for the sheep.

These days, a 32-inch-wide screen is considered paltry for a TV, or to judge by free roadside piles, it’s far too small for Vashon. But what if the donor said: “No, what I’m talking about is an LED wall and it’s 32 feet wide and 18 feet high.”

Life presents conundrums, sure. Seldom one this big, but still, the right answer would be: “I’ll take it!” Then you’d have to figure some things out, like what to actually do with it. If, however, like Eileen Wolcott, you had happened to own and run a theater for 20 years, you could file this under “good problems.”

This was the puzzle the Wolcott family faced, and it came at a fortuitous time. Their son, Jacob, had returned from working a spell in Las Vegas. While there, he watched a shipping container park grow up around an LED screen in an abandoned lot. It sprouted into an artists’ haven, and finally a modular, ultra-modern shopping destination, both a showcase and hang-out. (Checking online, the park also has a 40-foot-high praying mantis that breathes fire.)

In an odd Vashon-like coincidence, Container Park and a previous civic initiative in Oakland were the design-children of Simon Clark, who also happens to run Vashon Live! and lives on the Island. So, with 576 square feet of outdoor LED wall in hand, Jacob and Simon got together to set up another community chemical reaction, but with an added ingredient: vintage small town movie theater.

Even pre-COVID, the movie theater business was going the way of cinnamon toast and canned hams. All were great things in their day, and plenty still enjoy them, but let’s just say the demographic is contracting. During the pandemic, even when audiences were allowed into theaters, they stayed home and streamed to screens. By the time things opened back up, national theater chains were devastated, and attendance hasn’t recovered.

The Wolcotts noticed, but as grizzled vets of a tough industry, they also saw opportunity in adapting: Combine technology with ideal downtown positioning and transition to a modular, multi-use community-centered space.

What will that look like? As a clue, notice the disco ball hanging from the superstructure in their parking lot, lights bouncing off it at this very moment. OK. How about “Die Hard” showings over Thanksgiving? Doable. “The Maltese Falcon,” silent movies? Check. Simulcast concerts, sporting events, DJs, weekend markets, art installations, video game tourneys? Yep, day or night, including individual headsets and ordering food with mobile apps.

An on-site outdoor liquor license is in the works, and Eileen says, “We will be featuring locally sourced foods and drinks and collaborating with the restaurants and businesses around us.”

The Vashon Theatre itself has been in continuous operation since 1947, which has meant considerable investment in new tech and seating upgrades, putting it in the select company of landmarks like the Stanford in downtown Palo Alto or Port Townsend’s Rose Theatre (the latter served as a direct inspiration). Community-donated name-and-quote tiles a la the Pike Place Market helped generate funds for the back lot’s platform, Tuesday meeting nights are reserved for non-profits, and free screenings will continue on Thursdays, currently Ken Burns’s “National Parks.”

We will see preview of the new space on Halloween, where the Theater will host a costume party and try out some features. In strategy terms, this is called “Capturing the younger demographic, while re-generating the older segments.” For Vashon, it’s smart business and great to see.

Talking with the Wolcotts, it doesn’t take long to gain a sense for their commitment, intelligence, and flat-out determination to double-down on community. While getting the nuts and bolts together was held up by supply chain delays, they’re relying on their own sweat equity and are confident that all systems will be go for next spring.

As you go by the new construction, you can almost feel the town’s center of gravity shifting southwards from the four-way stop.