Home » Beyond the End of the Line 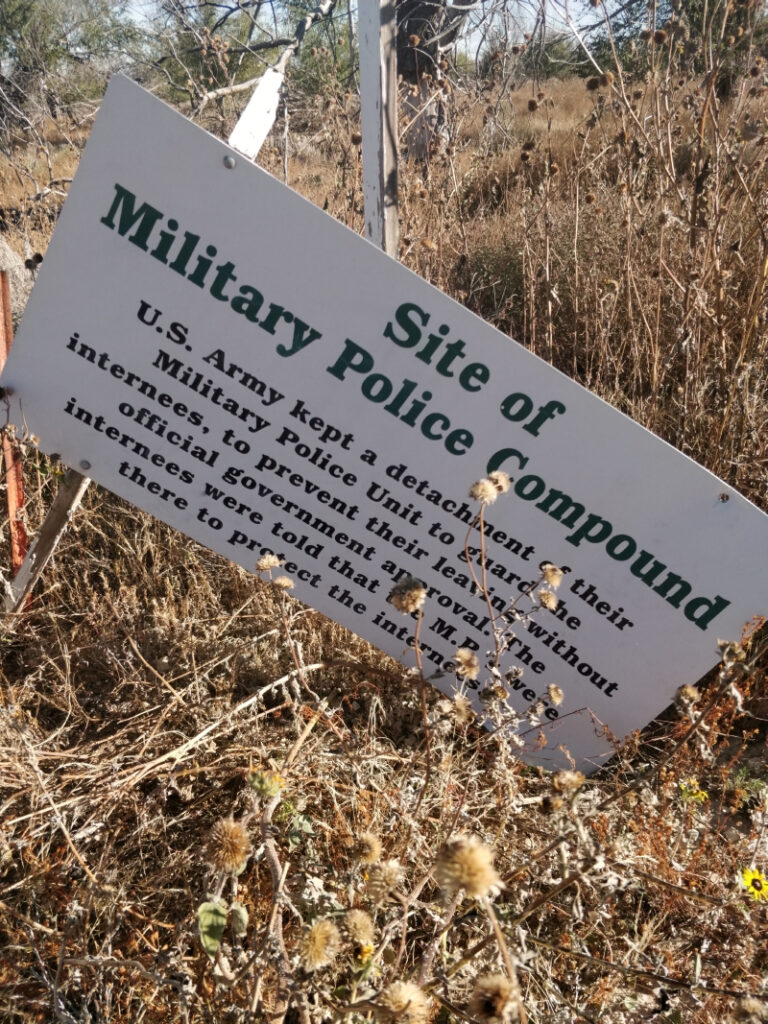 Beyond the End of the Line

In this article I attempt to use terminology that depicts the reality that Japanese Americans suffered in the War Relocation Authority (WRA) camps during World War II, as opposed to the euphemisms employed at the time and often used to this day. For further information, please see the references at the end of this article. To find out more about the Vashon Japanese American experience, visit the Vashon Heritage Museum and the Mukai Farm and Garden.

In Eastern Colorado last October, while seeking a campground called End of the Line, my husband Andy and I drove past a sign with an arrow above it: “Amache Japanese-American Relocation Center … Wait, is that a concentration camp?”

Indeed, we had just passed the Amache Japanese American concentration camp, established originally as the “Granada War Relocation Center.” A sense of disquiet filled me, and of ancestors, and the need to hear this story, to walk the land. Here on Vashon, Japanese American families were incarcerated in camps such as Amache. Andy and I ourselves live on land previously owned by an Island family that was forcibly removed to one of these camps.

The next day, Andy and I wandered the Amache grounds. As characteristic of these camp’s locations, the land is remote and desolate. Placards and various areas depict the harsh, crowded conditions to which people arrived: the lack of privacy, little protection from the elements, and poor and inadequate food and bathroom facilities. A watchtower still stands, atop which soldiers stood guard “For the internee’s protection,” but with machine guns and search lights directed inward, and barbed-wire fences configured to prevent anyone from escaping. Amache housed over 7,000 people within a square mile.

The bombing of Pearl Harbor on December 7, 1941 turned our world upside down, shocking the U.S. psyche in the same way that 9/11 would 60 years later, and the COVID-19 response more recently. Racial prejudice, concerns for national security, and perhaps the need to be seen as controlling the situation all overrode the safeguarding of individual civil liberties. On February 19, 1942, President Franklin D. Roosevelt signed Executive Order 9066, granting authority to the War Department “To prescribe military areas…from which any or all persons [of Japanese descent] may be excluded.”

More than 120,000 Japanese Americans became excluded from the West Coast and forced into military-style camps such as Amache. Two-thirds of them were Nisei, second-generation, and American citizens. Many Issei, first-generation Japanese immigrants, likely would have been citizens as well, had they not been barred from naturalization. No due process of law was involved in this incarceration, nor was there any evidence that these families and individuals were truly the threat to the U.S. they were deemed. Not one Japanese American was ever convicted of espionage or sabotage.

Mary Matsuda Gruenewald, in her book “Looking Like the Enemy,” describes her farm life on Vashon as peaceful and self-sufficient. She grew up with a sense of belonging within the Japanese-American and Methodist Church communities, as an Islander, and as an American. Following Pearl Harbor, an intense dehumanization of the Japanese took place and was extended to include Japanese Americans. This campaign was fueled by the media and governmental propaganda, and included outright lies such as false news that Japanese Americans had carved arrows in Hawaiian cane fields to guide the Japanese bombers to Pearl Harbor. In an erasure of their American identity, Japanese Americans were labeled as Japanese aliens and non-aliens.

In this mass rejection by American society, 37 Vashon Island families were uprooted from their homes and livelihoods. Throughout their incarceration, Mary and other Japanese Americans questioned: How could our country do this to us? Why are we being treated like criminals? Where is liberty and justice for all? Will I ever have the freedom again to come and go as I please? Mary’s memoir viscerally brings us into this experience.

Japanese Americans were presumed guilty – disloyal, threatening, anti-American. The burden was placed on them to time and again prove otherwise. Mary wrote of her family burning precious cultural items from Japan, submitting to an FBI search, and cooperating with the military during their forced removal from Vashon to an unknown location for an unknown duration, and later, to answering the confusing and culturally divisive “yes, yes/no, no” loyalty questionnaire.

At the Amache Historical Site, placards offer glimpses of how these families strove to make a home for themselves, to salvage and nurture a place of dignity, well-being, and community in an overcrowded, prison-like environment. The tenacity of the human spirit is evident in photos of bountiful gardens and myriad activities in which the people engaged. Despite the injustice of their incarceration, many attempted to contribute to the country that was their home, and to prove their loyalty. This included volunteering to serve in an all-Nisei military unit that families feared would be sent on the deadliest missions. While this fear proved to be well-founded, the soldiers of 100th/442nd Regimental Combat Team fought with heroism and devotion, becoming one of the most highly decorated units in the history of the United States Armed forces, and ultimately making a huge difference in influencing the government to rescind Executive Order 9066.

Mary’s book reveals repeatedly how her family relied on their Japanese American community, their traditions, and their faith in God to cope. Families had no guarantee that they might ever be permitted to return to their homes, or that they even had homes to which they could return. They feared for their lives and felt anxiety, anger, bitterness, grief, shame, and resentment within their situation. Despite the extreme stresses that catalyzed breakdowns in community and family ties in the camps, the Matsudas held a commitment to family unity, and to courage and honor.

The West Coast reopened to Japanese Americans in 1945, and in time, this chapter in our history came to a close; however, the lives of Japanese Americans were irrevocably changed, and reintegration was often slow and painful. It was only decades later – with time, pressure, and perspective – that cases came to court, and wartime documents revealed that government attorneys had withheld, altered, and destroyed evidence favorable to Japanese Americans, and had made false claims that they were security threats. The exclusion order and incarcerations were shown to be based on racism and falsehoods. In December 1982, the Commission on Wartime Relocation and Internment of Civilians (CWRIC) concluded that the incarceration of Japanese Americans had not been justified by military necessity. The report determined that the decision to incarcerate was based on “Race prejudice, war hysteria, and a failure of political leadership.”

I used to think that we as a society would never again commit such atrocities, or that we as citizens would never stand by and let them happen. But in past years, we’ve witnessed how severe stresses, fueled by media and an agenda, can set us against one another and heighten division. Individually, we may have experienced how fear of community rejection or retaliation leads us to keep our opinions, questions, and at-odds experiences to ourselves. Tumultuous times are exactly when values and rights must be examined and upheld, for they exist to show us which lines we do not cross, terrain into which we do not stray, and provide standards to guide thoughtful decisions.

Concentration camps such as Amache are our Island’s history. The Vashon Japanese Americans who were incarcerated are the grandparents, uncles, aunts, cousins, and neighbors to all Islanders today. If we are ever to enter a world of peace and justice, we need to begin where we are: Respecting our diverse backgrounds, life ways, and personal choices, and truly giving honor to our perspectives and viewpoints. Especially in stressful times, we must take care to continue seeing one another as the neighbors, friends, colleagues, and family we are, and to make time to engage in curious conversation in which we might all be changed for the better.

As difficulties arise in new ways, let us walk together. Beyond the barbed wire of fear, accusation, and blame is the open air of fresh thoughts, humor, and compassion. May we Islanders choose the fertile wild ground of possibility that lies beyond the end of the line, and do our part in daily acts of listening, kindness, and courage to ensure that grievous wrongs such as those that Vashon Japanese Americans suffered in World War II never take place again.

For discussion about appropriate terminology, and for more information about the Japanese American Incarceration, see densho.org/terminology/

NPR has an excellent article and 5 minute audio, From Wrong To Right: A U.S. Apology For Japanese Internment

jane Jane writes about what it means to be an Islander, and how we can nourish healthy community. Having lived with her family on Vashon for 20+ years, she remains convinced of the island's magic.