Home » My Little Slice of Heaven 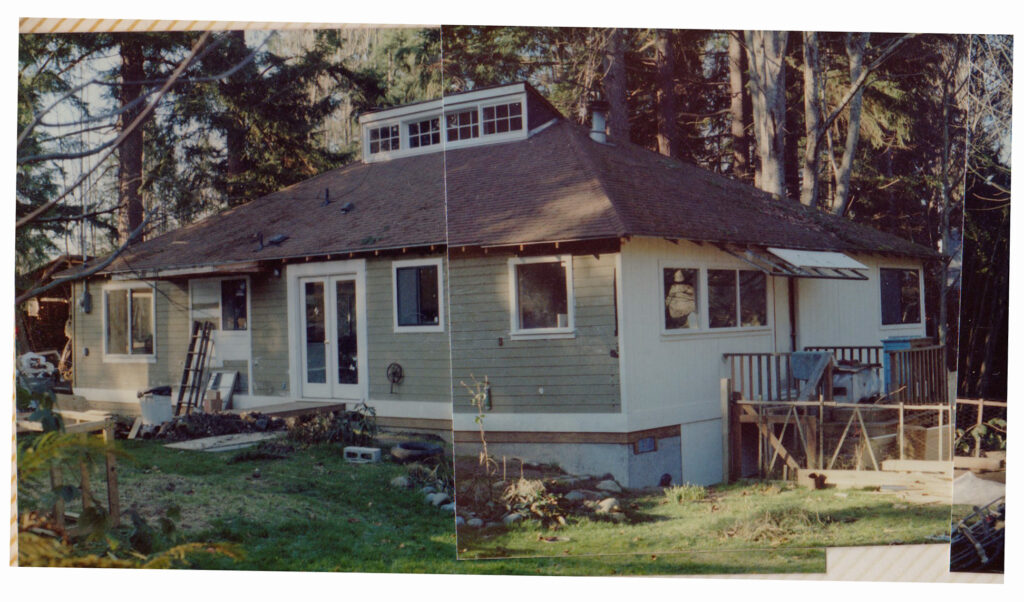 My Little Slice of Heaven

The cat jumped up on me, and he was wet. I thought maybe he had slobbered all over himself, but as I toweled him off, I looked out the window and saw the leaves on the apple tree bouncing with raindrops.

Earlier, before it rained, I swept off the front porch. That sounds straightforward, but like most chores, one darn thing led to another. Going out the front door, I bounced back when I hit a spiderweb that covered most of the door opening. Pretty one, too – one of those classic webs with radiating spokes and precisely placed rows of filaments.

I don’t know if the spider was more surprised than I was by that bounce, but I do know that she wasn’t expecting to catch something my size. I backed up and ducked under the web so her day’s work wouldn’t be wasted.

Home ownership is part of the American Dream, right? But it is almost impossible for young people starting out to buy a house, and Rick and I were no exception. We got this one because of dumb luck and low standards. For example, there was no bathroom in the mess hall, where the kitchen and bedrooms were, and we had to walk up the hill to the dormitory building and brush through cobwebs to get to a toilet. To get to the shower, you had to walk through an inky dark passage behind the toilets. Creepy.

The initial construction here began around 100 years ago by Norwegian-Danish Methodists, with help from the Epworth League. These fine folks built little cabins for campers, a dormitory with bathrooms, a church/Chautauqua Hall, and a mess hall. All the camp structures were still here when I arrived in 1977, but went away one by one, while the little summer cottages surrounding the camp were remodeled into year-round family residences.

The County removed the church building some time ago, before converting the field out front into a community drain field. We have a community sewer system now, and as far as I know, we all have indoor toilets. Wahoo!

You would think the people who built the camp would have noticed that water ran down the hill, turned right, and headed for the mess hall. Mind you, originally the mess hall was set on pilings, so the water flowed right under it and into the creek. But in 1987, when it was remodeled into a house, we got all fancy-schmancy and put a foundation under the place.

When we have a real downpour now, the water flows down the hill and into our yard, as it always has. There is a drain by the front porch that clogs right away in heavy rain, and then water flows over the porch, off the other side into a second drain placed there for such exigencies. The occasional floods leave behind shoals of sand, silt, and forest detritus – tiny cedar cones, sticks, and pieces of brush and grass. It did not rain long enough or hard enough today to flood the porch. But now that autumn is here, I need to go out there and make sure those drains are open.

Some people prefer to rent. If something goes wrong, they complain to the landlord, who is responsible for fixing it. Many of us, though, are really hooked on owning a house – it is a form of security, right? Well, sort of. The American Dream includes maintenance, repair, and those pesky property taxes. When the county values your property for more than you would ask if you were selling it, and you are asked to pay property taxes based on that value, it feels a little less secure, so the dream is not undiluted bliss.

I am getting older, and I sometimes think about moving to some place that does not have ferries and does have accessible medical care and other amenities of mainland life, like Dairy Queen chocolate-dipped ice cream cones. It may come to that, but for now this house is still my little slice of heaven – property taxes, clogged drains, and all.

The Dorsal Spin: Enduring Spirits
Ten Things to Know About American Healthcare That Industry Insiders Will Not Tell You, Part Two