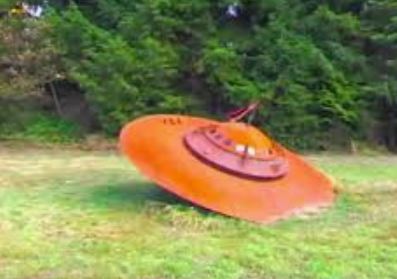 In the summer of 1947, Harold Dahl, a tugboat captain from Tacoma, described the hollow-centered crafts he saw as flying donuts. Edward R. Murrow, the nation’s foremost journalist, flew out to interview eyewitnesses, and he reported what they saw as “flying saucers.” The phrase was soon adopted as common parlance. But doesn’t “flying donuts” sound better? Which would you rather be abducted by? While saucers imply civilized cups of tea or classy coffees in the pre-latte era, on most days I’d go with donuts.

This year marks the 75th anniversary of the Maury Island UFO sightings. One clear Saturday morning, Dahl took along a couple of deckhands, his teenage son Charlie, and their dog Sparky to prospect the bay for rogue logs to tow and sell for timber. Waters were calm, but President Truman had announced the containment doctrine weeks earlier, officially starting the Cold War, and anti-communist tensions were building where anti-fascism had ebbed.

Thousands of former Nazi scientists, graciously adopted by both the United States and Soviet Union, were feverishly working to build intercontinental ballistic missiles capable of delivering explosions remotely, each rocket a Hiroshima magnified by hundred-folds. Space exploration was verging on feasibility, the US was producing 90% of the world’s gross domestic product, and corporations refocused their industrial might back onto customers. At General Motors, Harley Earl was designing tail fins and aircraft-inspired automotive styling for a masterful 1949 Cadillac set to wow war-weary buyers.

In 1947, conditions were perfect for a major UFO craze, and the aliens complied. Before flying in formation near Mount Rainier three days later, before crashing at Roswell on the 8th of July, mysterious objects chose the quiet shores of Maury Island to kick off their campaign. Dahl and his crew saw 6 shiny, circular craft above them. One craft started smoking, lost altitude, had an explosion, and dumped chaff and molten slag straight onto the deck, reportedly killing Sparky and burning Charlie’s arm. They ran the boat aground on Maury and sought cover under its high banks. Initially, they swore each other to secrecy, but were apparently far from the only observers.

The next morning, the original Man in Black allegedly knocked on Dahl’s door and threatened him (unconvincingly, it seems) to say nothing of what he had seen. The story gets stranger from there, its details best recounted by Steve Edmiston, a local lawyer, writer, and historian whose research and Freedom of Information Act requests resulted in a compelling 2014 documentary, “The Maury Island Incident.” This film has been shown at the Vashon Theater to enthusiastic receptions. There’s also a light, yet erudite, YouTube episode of the same title by Chris at Pretty Gritty Tours, a Tacoma-based channel featuring local history and places of note.

Whether aliens, cross-dimensional travelers, or hoaxes, the Northwest sightings were taken with utmost seriousness at the highest levels. On July 4, a United Airlines crew observed nine objects over Idaho, and hundreds of saucer-like objects were reported all over the US. On July 9, immediately following the Roswell incident, urgent investigations were convened by Air Force Intelligence, the FBI, and Wright-Patterson engineers. All soon concluded that disc-like crafts of unknown and possibly hostile origin were indeed flying about.

Two Air Force officers were sent to retrieve physical evidence of the fallen slag from Maury Island, which had cooled into small rocks. While flying the collection samples to an air base in California, their B-25J Mitchell caught fire and fatally crashed near Kelso. The cargo was lost, and they were the fledgling service’s first recorded deaths. At the end of 1947, a carte blanche government study, Project Sign, was organized, and the sightings, secrets, projects, and hearings have never stopped since.

Even as thousands of pages of meticulous documentation were recorded by FBI agents sleuthing in and around Tacoma, Maury Island was already fading back into obscurity. Still, a new era and way of thinking about our place in the grand spatial scheme of things had started. On one of my first visits to the Island, I was wading, shin-deep in the Sound, rummaging to find good stones for skipping. A piece of volcanic rock, palm-fitting pumice of the sort you find all over Hawaii, jumped out like a piece from the wrong puzzle. Picking it up I looked over at Mount Rainier, and wondered, “Did you get blown all the way here 600 years ago? Or were you dropped by a passing tourist from afar?”