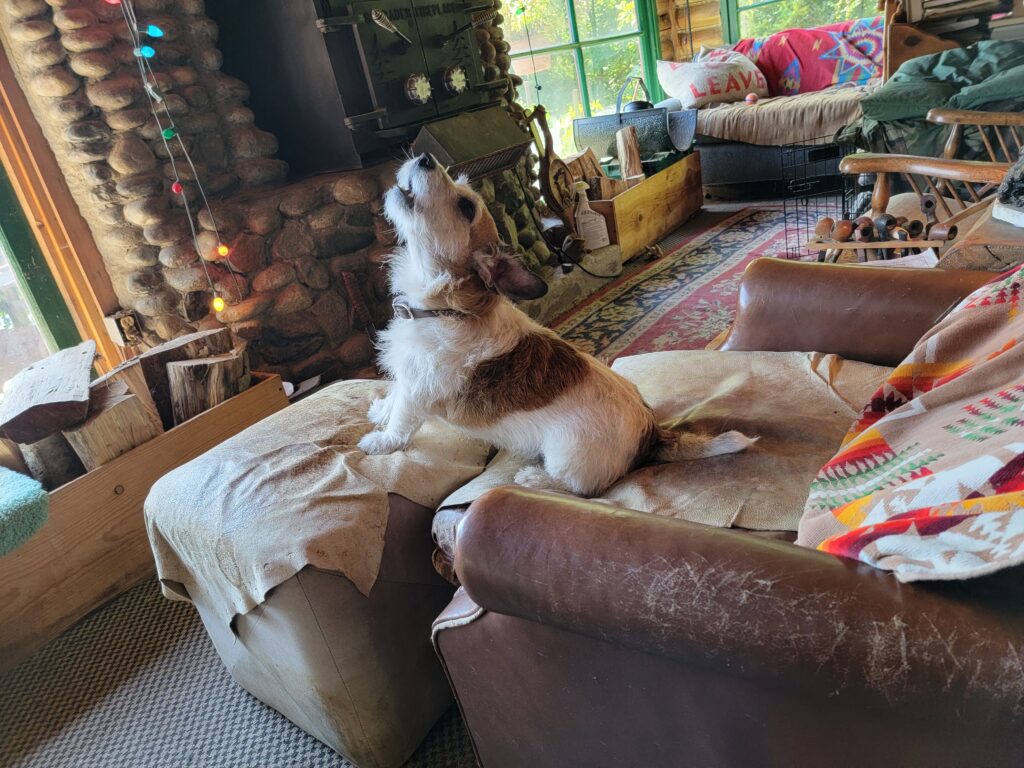 I was down on the floor on my hands and knees when John Sweetman walked in the door. “What are you doing,” he asked? “I have lost a gold crown while biting into a Winter apple,” I replied. John got right down on the floor to help me look. My little Jack Russell Terrier was hunting the floor with us. We called him Duffy the gold digger when he showed interest in a corner of the rug that had been turned up and found the gold crown, which reminded me of Dr. Coutts and Vashon.

We could hear his tires scrunching in the gravel as he came down our steep driveway with his engine off so as not to awaken our parents. Dr. Coutts was our family dentist and had been playing cards at the Sportsman’s Club all night long.

He frequently did this, and on his way home, Dr. Coutts would pick up our Sunday Seattle Times from our paper box, so, he could read the comics to us kids.

In 1948, there were only three of us kids and we silently sat in the breakfast nook while Dr. Coutts read Tarzan, Dick Tracy, and Little Orphan Annie, among others. We listened in awe, and when he was done reading, we thanked Dr. Coutts vociferously, anticipating the next time he would come down our driveway to read to us.

Being in Dr. Coutt’s chair wasn’t quite the same thing. He used novocaine, but no local, so the needle hurt like billy blue. His drill looked like something out of an erector set. When he put his shoe against the switch on the floor, there was an awful clatter as the black rubber band traveled over three wheels and turned the drill in his hand. The drill was slow, so the vibration against the decay in your tooth was great. So as not to elaborate, having your tooth drilled was pure hell. And then, Dr Coutts asked me to spit into a large white bowl with a little stream of water running around its edge to clean it constantly. When the cavity had been freed of decay, he would ask his assistant to prepare the silver amalgam that was to fill the cavity.

Before Dr. Coutts pressed the silver amalgam into the cavity, he held the silver ball between his fingers and rolled it, causing the silver to squeak. “Can you hear it?” Dr. Coutts asked as he held the ball of silver up to my ear. “Yes,” I replied as he worked the silver into the amalgam, a mixture of an alloy of mercury, and filled my tooth. “Tap, tap tap,”  went his wooden hammer and slender rod as he filled my cavity and made my tooth whole again.

My siblings and I hated going to the dentist, because of the pain, but wouldn’t stop saving our nickels and dimes to buy more candy at Mackie’s store at Cove, a half-mile walk from what dad called Run Down Ranch.

Dad never used that name much, because it sounds like Run Down Ranch was a mistake, when it was a paradise of youthful opportunities, some of which were good.  Each spring, Mike and I were sent into the peach orchard to paint the trunks with lime to stop small critters like caterpillars from climbing up and laying their eggs, which would yield thousands of caterpillars who built huge tents and could clean all the leaves from one branch, thus stopping the baby peaches from growing to big peaches.

I was at the top of the orchard, brushing the lime mixed with water, when there was an awful scream from the bottom of the orchard.  Mike had splattered lime in his eye, and went screaming to Mom, who washed out his eye with no permanent damage.

Mike told me he was in great pain, but it wasn’t nearly as bad as going to the dentist.

The Endless Light of Life
“It Takes a Village” – In Action