Home » It Was a Pleasure to Balance 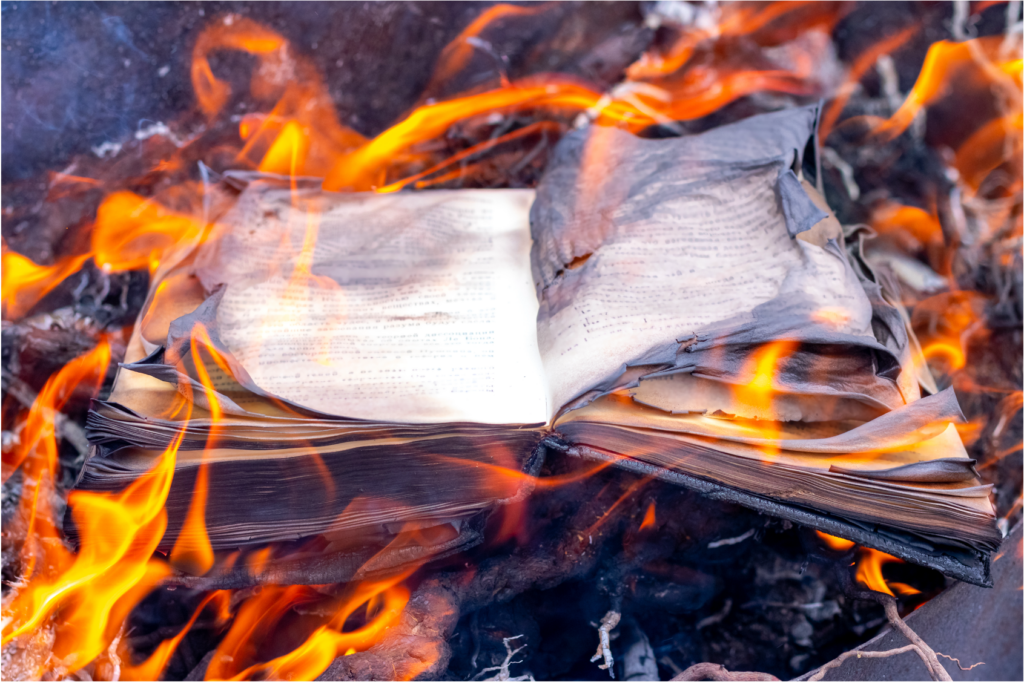 It Was a Pleasure to Balance

“It was a pleasure to burn.”

As many remember, that is the opening line to “Fahrenheit 451.” Published in 1953, it still occupies the #7 spot on the New York Public Library’s list of their most-borrowed books of all time. Its author, a pulp magazine story writer from the Midwest, tapped most of it out on a coin-operated typewriter in the UCLA library. A few years later, his next novel would hearken to one of Shakespeare’s witches as she sensed Macbeth’s approach: “By the pricking of my thumbs, something wicked this way comes.”

451 is a long meditation on censorship, its title referring to when paper auto-ignites. Bradbury foresaw big-screen TVs, automated law-enforcing hounds, and memory devices akin to the internet. In his own time, the McCarthy hearings were unfolding, Feds were pulling comics off of shelves for subversive content, and everyone knew the media-fueled phrase, “Better Dead than Red.”

The book itself was inspired when Bradbury was stopped for strolling down Wilshire Boulevard with a friend after dinner. A suspicious officer asked what they were doing and he replied, “Putting one foot in front of the other.” It was the wrong answer.

Science fiction asks big questions. Bradbury asked this one: “What if the censorship gets worse?” His well-considered answer was that it leads straight to systemic collapse. It leads to places where great minds always think alike … and fools seldom differ. It leads to the constraints well known in dictatorships. Who wants to be the one to tell Saddam Hussein he put his tanks in the wrong place? Or that he should surrender? If the moderating effects of open discussion are disallowed, if there can be no push-back without dire consequences, the apparatus of censorship guarantees decisions so wrong they lead to catastrophes.

Key struggles in the past were won by freethinkers with some peculiar ideas about governance. The principles they mapped out reflected their own argumentative personalities, sundry backgrounds, and individual beliefs. These were informed by an impressive understanding of humanity’s high and low natures, built on voracious reading of controversial books, printed so as to be readily available. Easy to forget at this remove, they remained enemies of the world’s most powerful kingdom and had to design a Republic of maximum resilience, one quickly able to withstand more conflict. To that end they embraced the concept of balance in opposition, in which if one or two arms of state faltered, were weak or corrupted, the others could stabilize and see through.

Patience, debate, and superior decision-making were prized over immediacy, much as a group of us might lock arms to make our way over glazed ice. Longer, yes, but surer, stronger, and more convivial. By extolling freedoms, they welcomed friction and fresh challengers to serve as antidotes to the tyrannies which had excluded them. It was an unparalleled leap of faith, and even after having landed safely, they didn’t know if it would last. Steeped in Greek and Roman history, they knew the cycles observable in all constructions, of birth, growth, prosperity, corruption, and rebirth.

Indeed, their creation has followed an oddly punctual timeline: 1701 brought Queen Anne’s War, which formed the 13 Colonies; 1781 saw the formation of the United States; 1861, a civil war that would weld them together; 1941, a triumphant Federal Government; and in 2021, a Milestone of Something. It’s hard to see the future, but harder to avoid the hunch we’re witnessing lateness of stage and entering a new era of American life. As emerging realities rearrange categories we’ve taken for granted, it may be yet more hard on our nation and its individuals, but people who know how to work, who know how to make things work, will be rewarded.

No matter how dedicated, the book burners Bradbury portrayed eventually became disenchanted and longed for truth, common sense, and fair play. For things as simple as original thoughts and kind remarks said in person, and sincerely. On the New York Public Library’s #8 spot of their most-loaned books is “How to Win Friends and Influence People,” by Dale Carnegie, published in 1936. If the cycle holds, it might be coming back in vogue.

This year is shaping up to be full of surprises. We can take hints from our designers, and entertain the balance that has gotten us through volatile times.

Terms of Concern
Turn Off the Stress, Breathe Deeply