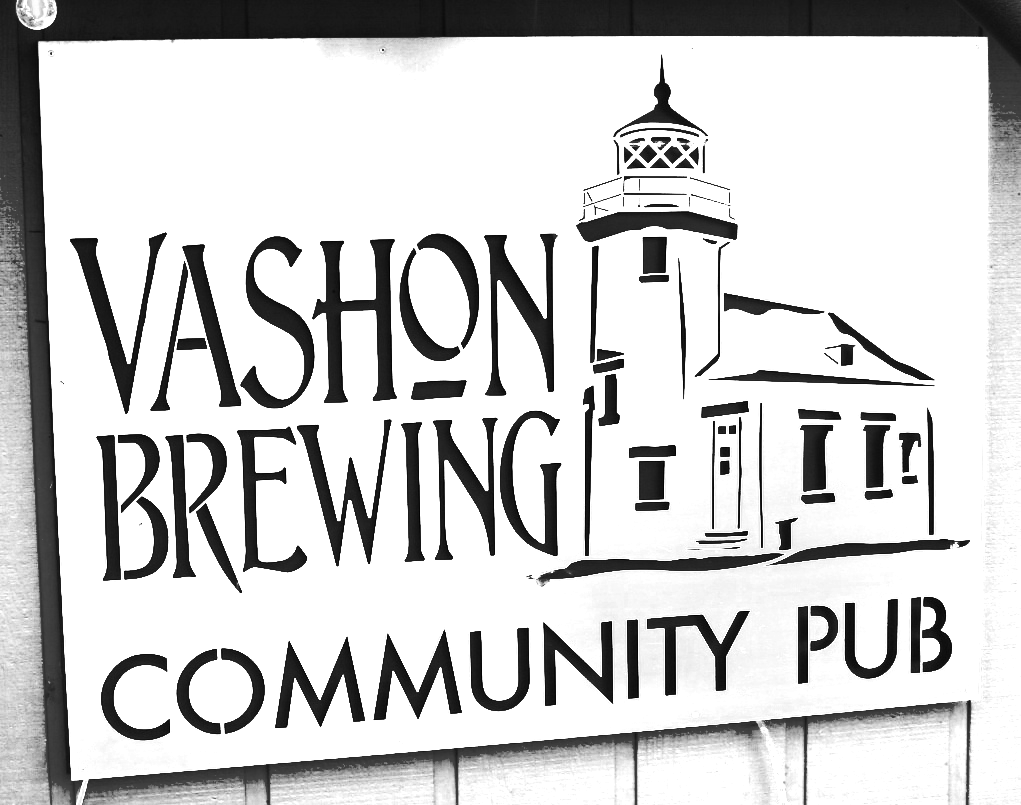 We moved onto Vashon more than 20 years ago, and although there were occupants in Vashon Village, most times when I walked through, the feeling I got was “ghost town.” Eleven years ago, Cliff Goodman established himself as a local brewer whose products eventually made their way onto the ferries and to our Farmer’s Market. Five years ago, Cliff opened Vashon Brewing Community Pub in Vashon Village, turning the Village into a destination for tourists and Islanders alike. No more ghost town!

Featuring his craft beers, Cliff also added a selection of other drinks. He also designed a modest yet diverse menu of foods to please most palates and dietary needs. All of this was housed in a building that blended new touches – the artistically stained concrete floors were done by Cliff himself – with original features such as the stained glass windows.

Not only did the pub attract its own dedicated clientele, but when “competing” events like the Strawberry Festival Beer Garden or a concert in the park happened, his sales went through the roof. It turns out that quality food and drink, served in a congenial environment, will always find enthusiastic customers who are just walking by.

The pub came about because of ferries – yes, Washington State Ferries caused a pub. Cliff was supplying beer to a few local ferry runs, and this had grown to be the large majority of his sales. But when a boat went down, or got assigned away to some other route, local vendors like Cliff were shut down. It became almost untenable to run a viable business for the vendors, who complained to WSF.

To address this, Washington State Ferries decided to let a single vendor run all concessions across the whole system. This precluded small vendors, and therefore ended the possibility of selling to the ferries unless you were a giant corporate supplier. So, most of Cliff’s sales disappeared in the blink of an eye. The need to develop a stable alternative sales channel for his beer led Cliff directly to his pub idea. The rest is Island history.

When I saw the “For Sale” sign in front of the pub, it was time to check in with Cliff.

The pub’s five-year lease was coming up, and this was the catalyst for Cliff to ponder whether it was time for a change. He has family throughout the United States and the world. He and his wife are very interested in getting to know their grandchildren while they’re still children, and this was an important factor in Cliff’s decision.

If you’re wondering about his brewing business, Cliff says that layers upon layers of laws make it almost impossible to sell it. He expects to sell the equipment to somebody who has completed their own mountain of paperwork, and who needs a set of brewing equipment that is ready to go. So enjoy his excellent beers while you can– in all likelihood, they will disappear in the foreseeable future.

Cliff describes the ideal buyer as a couple who can support each other in sharing big tasks, while taking turns covering shifts at the pub itself. Like so many businesses on the island have found, it’s especially hard to hire enough workers in the Fall and Winter seasons when a lot of the younger Islanders return to school.

If you run into Cliff or his wife, be sure to wish him well as he starts the next phase of his life!

Some more comments from Cliff after reading the article:

Hi Andy, been thinking about the ghost town angle, and have a slightly different take that gets closer to the true intent of leasing that particular space and sounds a bit less critical of the Vashon Village:

The intent of opening a retail space was, as you wrote, to find a better outlet for my beer after losing the ferry business.

I saw Vashon Village with its large front lawn as an underutilized space that could be turned into a nice community space with lots of potential uses, including an outdoor beer garden.

The name “Vashon Brewing Community Pub” was a nod to that vision, where people could hang out in a relaxed and family friendly environment.

Over time, we developed it into a space for live music, beer festivals, trivia games, open mike, and guest chef events.

During the worst days of COVID, it became an outdoor haven where people could reconnect in a safe environment.

Building community during good times and tough times is what I will remember most fondly, and I hope to find a buyer who will want to carry on that vision.

Sometimes You Hear the Light
The Roasterie – Coffee’s Long Road