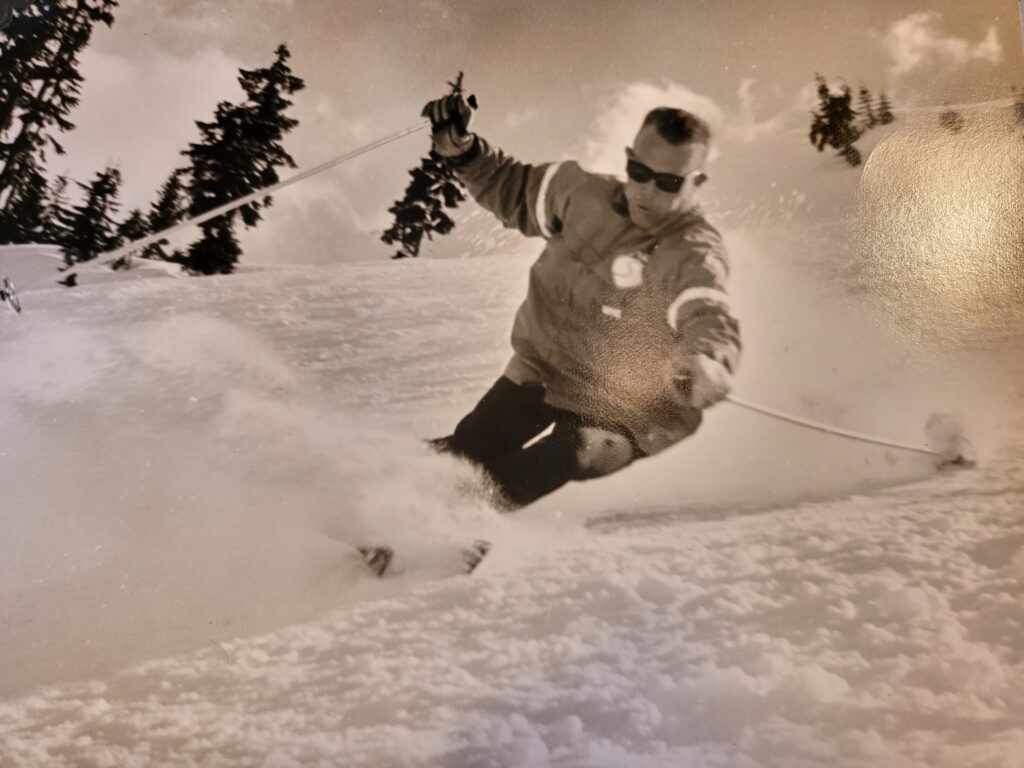 It’s just not nice to be hit with a snowball with a rock in it. At Cove, we forbade the use of rocks. They took the fun out of a good snowball fight. We hid behind the walls of our forts, a wall of giant snowballs that could be four or five feet high. Behind the wall, we had a pile of snowball ammunition and the snowballs flew!

Not so at Vashon grade school, where the bullies in the sixth and seventh grades used rocks in snowballs to intimidate and strike fear into the younger kids.

It was mid-December, and we hadn’t had a good snow yet. So, I took the skis to the shop behind the garage and proceeded to sand down the tops and paint the skis black, to honor the best and very expensive Head Skis. When it came to naming the skis, I spelled “Hed” across the top, so I could brag at school that I had a pair of “Heds.”

It always snowed five days before or five days after Thanksgiving, and then the Winter storms came. We gathered around the radio in the breakfast nook, hoping beyond hope that the announcer would tell us that “Vashon schools were closed until further notice.” We cheered, as it was our signal to get the sleds and skis out.

“In the late 40s and early 50s, there were a number of years where significant snow events occurred on the Islands. We youngsters much appreciated these events because we eagerly awaited news of release from school, and looked forward to snow adventures.” John claims, 70-some-odd years later, that he made the first discovery of “snowboarding,” although he grants that the evidence is pretty slim.

John’s parents had a small farm on Bainbridge. The farm had a large, old dairy barn with a giant roof and a metal roofed lean-to off the side. The barn was full of old cars, a military surplus snowcat, and a mostly finished spruce wood glider his dad was making.

The lean-to had been converted into a foundry and machine shop which John’s dad and his uncle Bill had set up to manufacture a model airplane engine, namely … the Husky 0.45. It was somewhat successful, in that it had a clever piston and port design and was extremely powerful.  It had such a high compression ratio that special fuel had to be mixed, making it hard to start, which probably led to it eventually being unpopular.

One day, after a big snowfall, John wandered out to the foundry followed by Fritz, the barn/house cat. The foundry had been running and all was warm inside. As John and Fritz settled into comfortable warm spots, a giant crash suddenly occurred as the heat caused all the snow to avalanche off the roof and tumble partially down the steep hill next to the barn. At the bottom of the hill was a frozen pond.

John went outside to inspect. He climbed up on the berm and tried sliding down on his butt. Being inside those bulky snowsuits of that era naturally slowed everything down. He looked around and spied a pile of hand-split shakes. Old shakes of first-growth cedar were cut about three feet long, and one looked just right for a makeshift sled.

He took one up to the top of the snow berm and stomped it into the snow to make a flat space to launch; he stood up on the shake to check out the path. And this is when all the rules of physics … gravity … dumb luck … seemed to be temporarily suspended, as the next thing he knew, he was standing upright on the shake and flying downhill! Probably yelling “I’m flying!”

Well, that ended as soon as the shake ran into the tufts of grass down the hill, and John flew face-first directly across the pond, with snow filling every opening in his snowsuit.

The only witness to this event was Fritz the cat, who was totally unimpressed. He merely licked his butt, and turned back to the foundry to wait for slower members of the mouse colony to appear.

The Problem With Anti-Lectin Diets
Staying Healthy With the Seasons