Home » The Value of a Musician 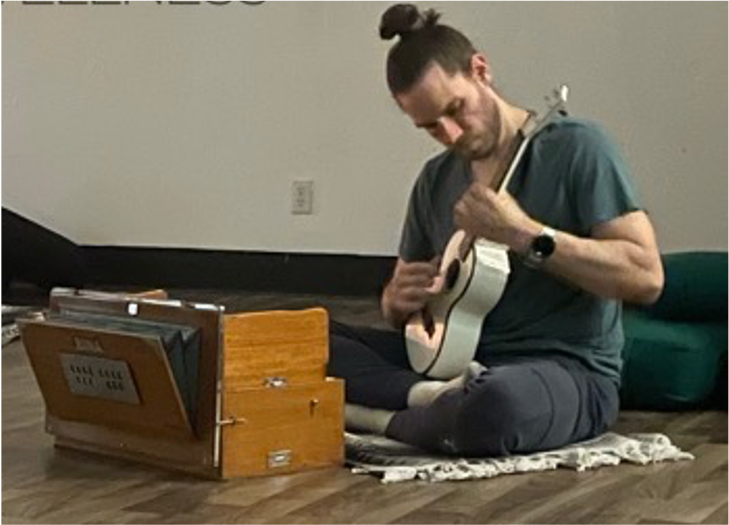 The Value of a Musician

Many Vashon Island children start music lessons and overcome the challenges of practicing regularly only to be confronted with the question of whether they should continue with music lessons in favor of pursuits deemed more profitable or worthwhile. Most musicians don’t get scholarships to music school, go on tour, or make a lot of money through music, and even the most diligent young student begins to hear messaging about how they need to pursue activities that will look “good” on resumes or applications. The value of years of playing music is often dismissed; however, music still has an inherent value that cannot be measured by fame, fortune, or even the most stellar resume.

Jonny Burgess was an island child who dreamed of using his developing musical talents professionally. He grew up imagining majoring in music at college or playing professionally. Jonny was a classically trained pianist, and after taking lessons on the island, he started commuting to Seattle for advanced training as a teenager. Adulthood brought responsibilities that did not seem to align with pursuing music as a career, so he used his skills on the island playing for church choirs, weddings, and funerals, and spent several years teaching piano lessons. Many musicians use their talents this way, in service.

Jonny couldn’t let go of the idea of pursuing music professionally, and in 2008 he graduated from a Certified Music Practitioner (CMP) course. CMP’s are trained to facilitate music in a healing or transitioning environment. Unfortunately, soon after obtaining his practicum at Puget Sound healthcare facilities, the economy took a downturn and many local CMP positions were eliminated. When money became scarce for businesses, music was one of the first things cut. In 2010, Jonny settled on a career path of nursing and ended up working in the intensive care unit at Tacoma General Hospital.

Jonny happened upon a harmonium at a yoga conference a few years later, which changed his musical outlook. A harmonium is a free-reed keyboard instrument that produces sound when wind sent by foot-operated bellows through a pressure-equalizing air reservoir causes metal reeds screwed over slots in metal frames to vibrate. Harmoniums are most often used in Kirtan music, which is a type of call and response music that developed during India’s bhakti devotional traditions. Many Kirtan songs are Sanskrit and are musical meditation or devotion. Kirtan music seemed to unlock a previously untapped musical depth in Jonny. Rapid mastery of the harmonium allowed for deeply soulful expression. He played live music for Bikram Yoga Studio for some time, and played in several Kirtan bands over the years before the Pandemic restricted opportunities for live music.

Jonny mastered the ukulele during the pandemic, and as the pandemic continued beyond what anyone anticipated, Jonny finally decided that it was time to integrate music into his nursing practice. With the support of a respiratory therapist on his unit, Jonny started playing for patients in the ICU. Nurses have worked incredibly hard during the Pandemic, and he still found time to play and sing for patients. He would be in full COVID protective wear and would play for healing or transitioning patients because: “It helps with emotional processing, it provides more organized brain activity, it provides distraction and multidimensional healing.” Music in this setting is unique to the patient and Jonny’s ability to play a broad scope of genres and provide meaningful experiences for individuals. MultiCare has recognized him for his exceptional patient care, and co-workers have posted videos on social media of him playing in his Covid personal protective equipment.

Today, Jonny’s nursing schedule allows him to play live music for Asha Yoga and Wellness in Gig Harbor. He continues to expand his skills and repertoire, composing music for ukulele and harmonium, and still finds time to play advanced Chopin pieces. Chopin remains one of the classical composers that intrigues and challenges Jonny, and he has mastered more than 50 Chopin pieces.

Many musicians don’t find their name in lights or receive substantial paychecks. Author W.A. Mathieu claims that “Everyone is musical by nature.” While Jonny Burgess is certainly a gifted musician, finding immense personal joy and satisfaction as he freely shares his talents, Mathieu’s words make one wonder how many adult lives could be enriched if we let go of a limited conception of musical “success” defined by money or acclaim.

What Matters
VALISE Gallery Presents What the Hell’s Going on Here?!