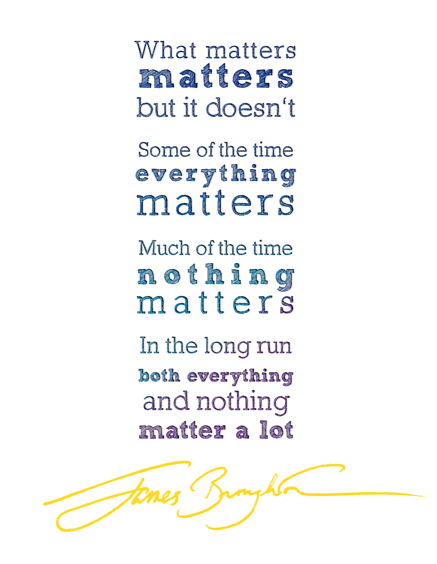 In the 1990s, I was part of a group of journalists who conducted a research study on the future of community communication in the Puget Sound area: “Good News/Good Deeds: Citizen Effectiveness in the Age of Electronic Democracy.” We looked at the relationship between so-called non-profit organizations (we suggested they be called “the community sector”), conventional news media, and so-called “new media.”

I asked my friend and mentor James Broughton, a filmmaker and poet living in Port Townsend, what I should say to journalists who are writing “the first draft of history.” He gave me his poem “WHAT MATTERS” … and when I took it to journalists, some scoffed, and others — like Chris Peck, who edited the Spokane Spokesman-Review and later the Memphis Commercial Appeal — framed it and put it on his office wall.

In 2013, I released a documentary film about James and his “adventure, not predicament” playfulness (“Big Joy: The Adventures of James Broughton”). I hope the revived Loop embodies the truths, loving complexity, integrity, and contradictions in this poem.

Humanity’s Existential Threat and Solution
The Value of a Musician